This is a cross-post from Teacher Tom’s blog. You can see the original post here. 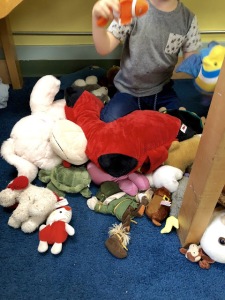 Last week, I found a pair of our three-year-olds holed up under our loft, surrounded by stuffed animals, cracking one another up with rhymes. 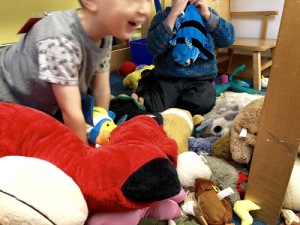 It was a silly, almost wild game, one punctuated by breathless laughter and the occasional animal throwing.

One of the most pernicious of our societal misconceptions is the one that suggests that if adults don’t play a hand in keeping children busy, then they will, at best, waste their time, and to your average adult this game was a classic waste of time. They aren’t even using real words for crying out loud!

As a human with well over half-a-century under his belt, I know that the only waste of time is the time spent doing meaningless, joyless tasks at the behest of others. And as a teacher, I know that children, when left to their own devices, invariably play in ways that are, to them, both purposeful and meaningful. These kinds of rhyming games, for instance, are a way of playing with language, exploring it, delighting in it. Experts say that this sort of thing is a building block of future literacy. I can see how this would be true, but I almost hate mentioning it because I know that there are some, influenced by the cult of keeping-the-kids-busy, who will take this information and ruin everything by trying to “extend” it or “scaffold” it, by creating rhyming worksheets or computer games, or to in some other way take it over with the idea of rendering it “educational.” 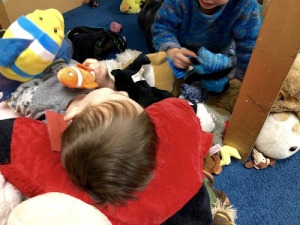 With the holidays upon us, there will be a temptation to “keep the kids busy” while they’re out of school, to look for ways to make things educational or productive or at least not a waste of time, but it’s a temptation worth fighting. We all need more time to be bored, to be silly, to play. The kids are alright without us adults always butting in: they aren’t wasting their time, indeed, they are using it for it’s highest purpose . . . burpose, murpose, turpose.